Quantum computing can be a game-changer in such fields as cryptography and chemistry, material science, agriculture, and pharmaceuticals when the technology becomes more mature. Quantum computing has a complex nature and this can be used for a solution for complex mathematical models that form the basis of today’s economy:

What is quantum computing?

Shortly, qubits have two different property that is different than the whole concept of classical computing. Entanglement is a property of qubits that allow them to be dependent of each other that a change in the state of one qubit can result and immediate change in others. more than one state during computation. Superposition states that qubits can hold both 0 and 1 state at the same time.

Why is the future of quantum computing important now?

What are the main subjects for quantum computing?

Quantum Cognition: Quantum cognition aims to model concepts such as the human brain, language, decision making, human memory, and conceptual reasoning by using quantum computing. The quantum cognition is based on various cognitive phenomena defined by the quantum theory of information in order to describe the process of decision making using of quantum probabilities.

Quantum Neural Networks(QNN): QNNs are a combination of classical artificial neural network models with the advantages of quantum computing in order to develop efficient algorithms. QNNs are mostly theoretical proposals without full physical implementation. applications of QNN algorithms can be used in modeling networks, memory devices, and automated control systems.

Quantum Optics: Quantum optics is an area that examines the interaction of photons with particles and atoms. Further research on this subject provides a solution to problems encountered in semiconductor technology and communication. In this way, quantum computing can enable further development of classical computers.

What are the possible applications of quantum computing in the future? 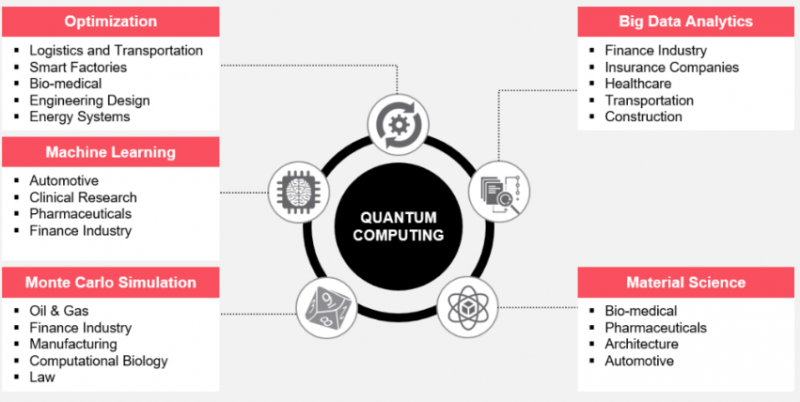 What are the key challenges in the future of quantum computing?

Manufacturing stable quantum processors and error correction: In order to take advantage of the properties of quantum mechanics, it is needed to perform manipulations at smaller scales, sometimes smaller than an atom. Small scales cause stability and error verification problems. Quantum researchers state that error-correction in qubits is more valuable than the total number of qubits obtained. Since qubits cannot be controlled with accuracy, it remains a challenge to solve complex problems.

Maintaining the extreme operating conditions: In order to increase stability and control qubits, IBM keeps temperature so cold (15 milliKelvin) that there is no ambient noise or heat to excite the superconducting qubit. Keeping the temperature so low also creates stability problems in itself. For broad commercialization of a quantum computer or processor, operating conditions should be improved. Quantum researchers are looking for ways to use quantum processors at higher temperatures. The highest operating temperature has been reached recently. 1 Kelvin, ie -272 degrees, was recorded as the highest operating temperature. However, it seems to take more time to operate these systems at room temperature.

Problems such as stability and error correction are dependent on technology investment, research resources and developments in quantum mechanics. Different organizations are trying to obtain the most accessible quantum computer technology by trying different methods. It will take a while to see which approach will bring success in different areas.

If you have questions about the future of quantum computing, we can help:

Ultimate Guide to Process Mining in 2020