Artificial intelligence adoption is increasing. IDC expects that 75% of commercial enterprise apps will use AI by 2021. Customers who are delighted with the personalized experiences they get from brands, thanks to AI, start to expect the same experience from every brand and institute they engage with. According to Accenture, 92% of US citizens report that improved digital services would positively impact their view of government. Therefore, governments are willing to invest in AI. For example, recently, Danish architecture firm BIG and Chinese tech company Terminus revealed their plans to build an “AI City” project named Cloud Valley in the south-western Chinese city of Chongqing.

In this article, we focus on AI applications in government. We will answer all important questions regarding artificial intelligence deployment in government, from challenges and best practices to real-world public sector case studies.

What does artificial intelligence offer to governments?

What is the level of government’s interest in AI? 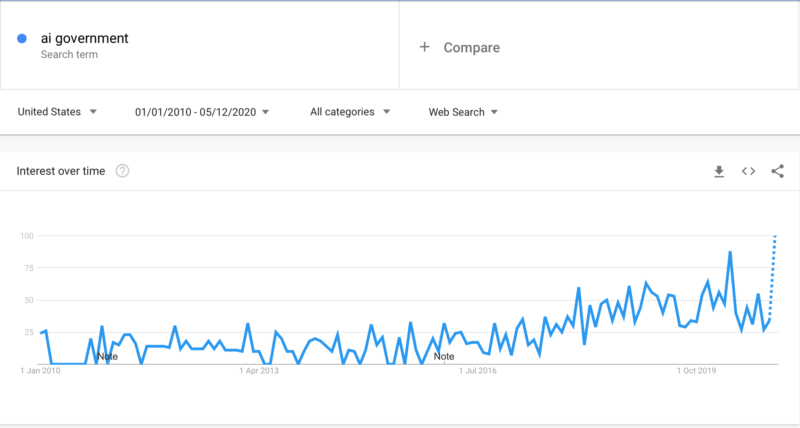 Even though there was interest in AI in government since 2000s, the interest, at least according to Google’s data, was focused on just specific days. After 2010, there has been continuous and increasing interest in AI.

What are AI applications/ use cases in government?

What are the challenges of AI in the public sector?

Unemployment is the scariest part of artificial intelligence if we disregard the hypothetical scenario of an AI takeover. Governments, as public service providers, should be concerned about the impact of AI on human jobs in government. To mitigate the impact of potential unemployment due to automation, governments need to ensure that humans focus on higher value added tasks or move on to the private sector if their current tasks are going to be automated.

AI algorithms may contain biases due to prejudices of the algorithm development team or misleading data. Though building an unbiased AI algorithm is technically possible, AI can be as good as data, and people are the ones who create data. Therefore the best thing governments can do for AI bias is minimizing it by applying best practices.

It is not easy to explain how all AI algorithms arrive at their predictions (i.e., inferences) however there are technical approaches being developed to overcome this shortcoming.

Accountability of AI systems is an issue of AI ethics. Governments are like the US and the UK are introducing new laws about companies’ AI algorithms’ accountability. It will be hypocrisy if governments and companies are not held accountable for accidents & false predictions their AI algorithms make.

AI transformation in government is difficult because

What are the best practices of AI for governments?

Some best practices of AI transformation are:

Feel free to check our related article for more information.

And if you still have questions about AI applications in government, don’t hesitate to contact us:

Natural Language Generation (NLG): What it is & How it works